International President Emeritus Edwin D. Hill, a transformative trade unionist who modernized and shepherded his beloved IBEW through one of the deepest and most painful recessions in history, died Saturday, Dec. 1. He was 81. 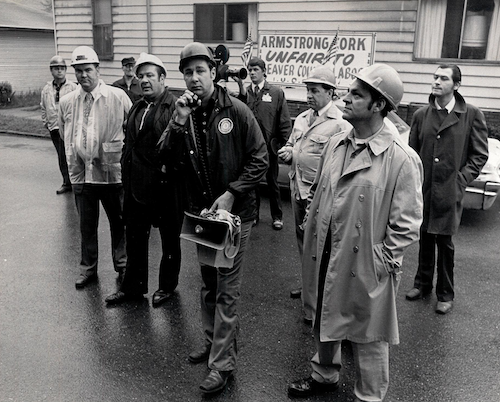 Hill was a second-generation member and a labor activist from his earliest days. Here, he leads a labor rally as business manager of Beaver, Pa., Local 712 in 1973.

“The labor movement has lost one of its great visionaries and leaders,”said International President Lonnie R. Stephenson, who succeeded Hill upon his retirement in 2015. “We join with President Hill’s friends and family in mourning his loss.

“But while this is a moment of great sadness, we draw inspiration and joy from President Hill’s nearly six decades of service to working families and the union that was the cause of his life: the International Brotherhood of Electrical Workers.”

Under Hill’s leadership, the IBEW held fast to its history and traditions while making key changes to modernize and preserve the Brotherhood’s influence as one of North America’s most powerful voices for working people.

Key to that influence was Hill’s laser-focus on organizing. When he ascended to the office of international president in 2001, he wrote:

“Some leaders in Washington revel in hobnobbing with the powerful. I recognize the importance of a strong presence in the halls of power, but I know that any power we wield comes from our strength in numbers and our solidarity as working people.”

It was a lesson Hill had learned over the course of his 54 years as an elected union officeholder, starting in 1961 at Beaver, Pa., Local 712 on the political action committee just a year after he topped out as a journeyman wireman.

A second-generation IBEW member from Center Township, Pa., Hill’s long belief in the collective power of working people carried him through decades of leadership that saw the labor movement subject to vicious attacks from union-busting politicians, misleading campaigns from companies seeking to maximize profits on the backs of workers, and ultimately, the most devastating economic downturn since the Great Depression.